Tuesday, June 19 is the budget re-vote.

East Ramapo has seen more budgets voted down than any other district in NY State.

There is also a continuing crisis of trust in East Ramapo.

People do not feel sure that all of their tax dollars are really going towards education.

This is because the school board has been found to be favoring the interests of private religious schools (yeshivas) which are infamous for taking public education dollars but not providing an education to the students.

However, our district also has many hard working staff who love the students and are doing their best under very difficult circumstances.

We cannot afford to let these good people down.

We cannot afford to let the children down.

Even though it can feel like paying a ransom, we have to keep things in perspective.

First, be aware that your school tax is not your whole property tax bill. The proposed increase only applies to the school tax portion. For each $1000 of school tax a homeowner now pays, there will be only $28.90 additional per year. That’s about $2.41 per month.

Second, even though there is still a lot of mistrust, one thing we do know for sure is that a failed budget will cause suffering for the children next year.

So, we are asking you to take a few minutes on Tuesday, and vote YES for the budget.

You know we will continue to push hard for more accountability, and eventually for some long term solution to our crisis, so aptly called “A Not So Simple Majority” by This American Life.

Tuesday is a different job, but just as important. Please Vote YES for the budget.

Reminder: Tonight (Tuesday June 12) at 6:30 at the Rockland Legislature

Please attend this meeting, to show support for this essential action to protect every child’s right to education.

URGING THE NEW YORK STATE LEGISLATURE TO PASS BILLS A.1305

AND S.1733 CREATING AN ENFORCEMENT MECHANISM FOR NONPUBLIC

WHEREAS, In 2015, Parents of students and former students of several religious

school and education officials failed to provide boys with a sound basic education; and

WHEREAS, The lawsuit claimed that the students were only provided a limited

schools to raise their educational standards; and

WHEREAS, Currently, New York State Education Law requires that a student in

a non-public school must be provided with a substantially equivalent education. The

education regardless of where they receive instruction; and

WHEREAS, · New York State Education Law, however, does not provide an

standards leaving parents and students with no remedy; and

failing to comply with the educational standards already set in place; and

WHEREAS, the Committee has met, considered and by a

vote, approved this resolution; now therefore be it

RESOLVED, that the Legislature of Rockland County hereby urges the New York

Legislature to pass Bills A.1305 and S.1733 to amend the Education Law by creating an

enforcement mechanism for education standards in non-public schools; and be it further

RESOLVED, That the Clerk to the Legislature be and is hereby authorized and

directed to send a copy of this resolution to Hon. Andrew M. Cuomo, Governor of the

Majority and Minority Leaders of the New York State Senate and Assembly; and to such

other persons as the Clerk, in his discretion, may deem proper in order to effectuate the

purpose of this resolution.

WHILE thousands were running away from the deadly smoke, terror and carnage that was 9/11 – they were rushing in.

Some 75,000 firefighters, police officers, paramedics and rescuers risked their own lives to save others.

In the following days, people from every state – and almost every single district – of America helped at Ground Zero – rescuing casualties, digging up bodies, cleaning up and rebuilding.

Now they are paying a high price for their selflessness – while most of the world remains oblivious to their suffering.

Over 2,000 first responders – anyone who helped out at Ground Zero, including building workers, electricians, doctors and paramedics – have died from illnesses caused by breathing in the toxic fumes that engulfed the site in the weeks after the terror attack.

As thousands more currently battle 9/11-related diseases such as cancer or severe respiratory disease, shockingly, it’s predicted that by the end of this year the number of first responders who have died since the tragic event will overtake the number who died on the day.

The 2nd U.S. Circuit Court of Appeals in Manhattan rejected the agency’s challenge to “Jimmy Nolan’s Law,” a 2009 state law giving injured 9/11 workers an extra year to seek compensation from public entities even if the statute of limitations has run out.

By a 3-0 vote, the appeals court said the BPCA, a state public benefit corporation, was not exempt from the general rule that state entities lack authority to challenge the constitutionality of state laws.

A spokesman for the BPCA said the agency does not discuss pending litigation. The agency was created in 1968 to help develop Manhattan’s lower west side, known as Battery Park City.

The New York legislature passed Jimmy Nolan’s Law after U.S. District Judge Alvin Hellerstein in Manhattan dismissed hundreds of lawsuits by 9/11 workers who claimed respiratory and other illnesses because they were filed too late.

The law was named for a carpenter from Yonkers, New York, who suffered from respiratory problems and skin allergies after doing Ground Zero cleanup.

After the 18 workers refiled their claims, Hellerstein in December 2014 called the law an “extreme exercise of legislative power” and declared it unconstitutional.

Wednesday’s decision voided that ruling, and returned the workers’ claims to Hellerstein. 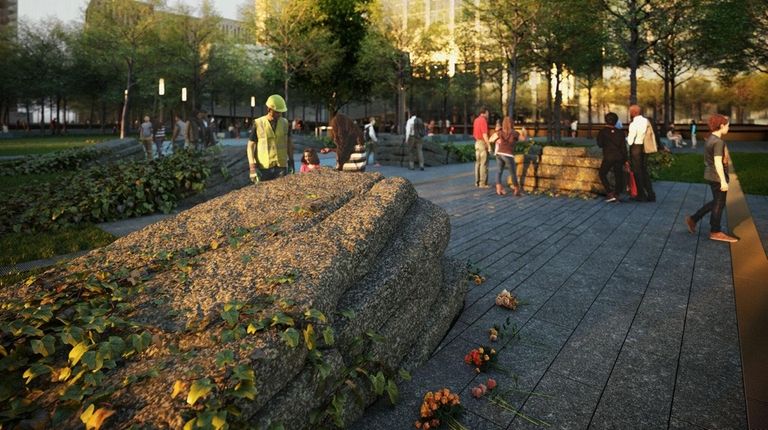 An artist’s rendering of a new area at the 9/11 memorial will honor people who have died or are suffering from the effects of their exposure to toxins at Ground Zero. Photo Credit: MOSO Studios

Worn, but not beaten.

That’s the fitting description the National September 11 Memorial & Museum provided for the large stones that will point toward the sky and mark a new pathway at the World Trade Center: a tribute to survivors and first responders who are sick or have died from 9/11-related illnesses. The new section of the memorial will be located in a grassy section of the southwest end of the plaza.

It’s been 16 years since first responders ended rescue and recovery efforts at the World Trade Center. But in illness after illness, and loss after loss, the tragic impact of the months they spent at “the pile” reverberates in the ongoing suffering of tens of thousands of rescue and recovery workers, area residents and others who were exposed to toxins.

News, discussion and information about the National September 11 Memorial & Museum

Members of the 9/11 community gathered in Foundation Hall on Wednesday evening to pay tribute to those who took part in the rescue and recovery operations at Ground Zero. Photo by Jin Lee, 9/11 Memorial.

Members of the 9/11 community gathered at the 9/11 Memorial Museum Wednesday night to mark the 16th anniversary of the completion of the rescue and recovery efforts at Ground Zero.

First responders, rescue and recovery workers, lower Manhattan residents and survivors of the attack came together near the Last Column in Foundation Hall for a special ceremony to honor the brave individuals who served with dedication and selflessness after the attack.

The ceremony paid tribute to those who took part in the nine-month recovery operations at Ground Zero, which removed 1.8 million tons of material from the World Trade Center site. A special program featuring firsthand accounts from individuals who aided in the relief efforts during the recovery operation preceded the ceremony.

Earlier in the day, a design was unveiled for a dedicated space to honor the ongoing sacrifice of rescue, recovery and relief workers, and the survivors and members of the broader lower Manhattan community, who are sick or have died from exposure to toxins at the World Trade Center site in the aftermath of 9/11.

FBI says agent exposed to toxins from 9/11 has died

ATLANTA — The FBI’s special agent in charge of the Atlanta Field Office died Saturday because of complications from being exposed to contaminants at the World Trade Center after 9/11.

David J. LeValley served in Atlanta since November 2016 and he previously served as the special agent in charge of Criminal and Cyber Division at the Washington Field Office, the FBI said in a news release.

LeValley joined the FBI in 1996 and was assigned to the New York Division where he served following the Sept. 11, 2001, terrorist attacks on the World Trade Center.

He spent several weeks being exposed to many contaminants, according to the press release, and he died “in the line of duty as a direct result of his work” there.

The scene of devastation, taken Sept. 28, 2001, of the fallen World Trade Center, where toxic air sickened hundreds of recovery workers. (Photo by Andrea Booher, for FEMA)

I didn’t know there was a living monument near here dedicated to 9/11 first responders. I should have known; now, at least, I do.

Who could know that there are more than 1,000 names carved into granite there, a living testament to unflinching bravery and unrelenting devotion?

And the names enshrined there are in no way a complete list of the dead. Not by a long shot.

Who knew that America’s darkest day would linger in the toxic air, a miasma of disease attacking people years after the vile, sneak attacks on the World Trade Center and the Pentagon.

Who knew that for first responders, searching for victims meant risking their own lives? Even if they did know, they would have searched that poisoned war zone anyway, combed every inch until everyone, the living and the dead, could come home.

The government should have known; it claimed the air was safe. But our government wanted the world to know that America was open for business. And because of that, people died.

FREEPORT — Lt. William Gleason was awake for six straight days following the terrorist attacks of Sept. 11, 2001, as he worked to rescue people from the rubble of the World Trade Center.

As he worked, Gleason, then a member of the New York City Fire Department, did not know he was exposing himself to toxins that would affect his life forever. The retired paramedic was at Aquin High School on Tuesday to share his story of what happened after the attacks, and what life has been like for him and for other first responders who were there after the twin towers fell.

“The young ones — they have no idea how bad it really was,” Gleason said. “They also have no idea of the sacrifice and the honor. We put others before ourselves that day and we were willing to do whatever it took.”

He’s still still paying the price. As a result of his exposure to the polluted air at ground zero, Gleason has lost more than 60 percent of his lung function, takes 33 medications for his 32 medical problems and gets a biweekly shot in order to breathe.

And he’s not the only one.